Silicon Valley is a talent magnet. With prestigious high-tech corporations such as Google, Apple, Facebook, Netflix, and Tesla Motors among the Fortune 1000 companies and thousands of startups finding their home in the world-renowned technology hub, this comes as no surprise. And because top-tier IT talents are increasingly becoming hard to find, Silicon Valley is also known for its poaching practices.

Depending on which side of the debate you’re on, talent poaching is either good or bad news. Top executives dread the possibility of their high-value employees getting poached by competitors, while talents with in-demand tech skills just might be waiting for the right opportunity to jump ship.

The ethics of talent poaching

Talent poaching raises serious questions about ethics. You “steal” good people away from the competition, after all.

But Tim Gardner, a Vanderbilt Owen Graduate School of Management professor and co-author of “The Ethics of Lateral Hiring,” insists there’s no ethical breach when companies target and hire employees from competitors. He adds though that the strategy possesses downsides and can be unacceptable in some cases.

High-demand tech positions that are hard to fill are a primary reason for talent poaching. According to a 2014 Brookings report, STEM openings, which included computer science and engineering positions, took longer to fill compared to job openings in other fields.

The median advertising duration was almost twice as long as non-STEM vacancies. San Jose and San Francisco were two of the metro areas with the longest average durations at 59 days and 56 days, respectively.

As such, it’s little wonder that hiring departments and recruitment firms look for employees already working for competing companies. And while there’s no question that fresh grads can be nurtured and honed with the right training and tools, innovations in tech can also happen at a blurring pace.

Hence, the preference for employees who can bring with them not just skills, experience, knowledge, and insight but possibly the entire team they work with – and perhaps even their clients.

The good and the bad of talent poaching

A study by Kellogg Insight researchers suggests that under certain conditions, employee poaching is a win-win for all the parties involved. For one, it facilitates knowledge transfer and the spread of best practices throughout an entire industry.

Secondly, it allows companies to maintain a pool of highly skilled workers they can all benefit from. And third, poaching presents a possible productivity and revenue boost even for the company who loses employees.

In the same vein, according to SaaS platform WalkMe president and cofounder Rephael Sweary, if talent poaching is practiced on a wide enough scale, it “can be a net positive.”

He says the dynamic is similar, in a way, to a traditional Japanese business model, keiretsu, where member companies share talents among them, resulting in employees exposed to different business environments and practices, who then can evaluate workflows, technologies, and processes with the fresh eyes of an outsider.

Talent poaching is a slippery slope that experts warn to approach with caution. Some consequences to be wary of: talent war with a competitor, a reputation for poaching, strained relationships with partners, and possible lawsuits for breaching non-compete agreements or infringing on intellectual property rights.

Another problem is when the acquired employee doesn’t live up to expectations. There’s workplace tension as well, where staff may find the presence of a “new but special” talent aggravating. Consider also that an outside hire may first need to adjust to the work environment and workplace culture before they’re fully productive.

Most importantly, talents who jump ship after being offered exorbitant sums of money may quit in favor of the next company that offers more.

Business Insider recently published Paysa’s list of the top 10 tech firms willing to pay the most when poaching talents from competitors, which you’ll find below. (Earning figures are in U.S. dollars and based on the salary trends of 31,000+ transitions.) 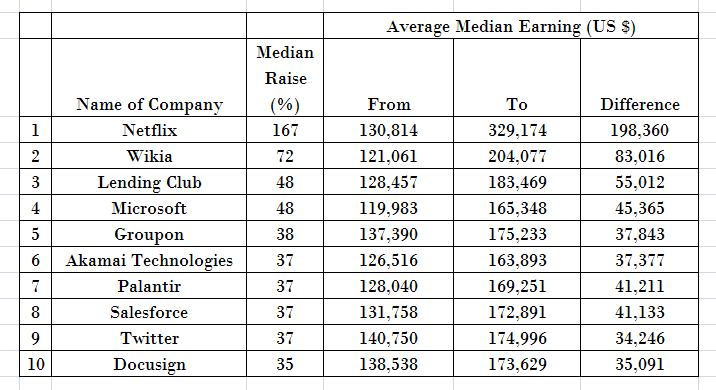 In terms of who poached the most employees from competitors, Google tops the list at 12,000+, with Microsoft yielding the most talents to the search giant.

Alleged anti-poaching deals that have surfaced

Silicon Valley is no stranger to controversies: diversity, women in tech, and tone-deafness, to name just a few. Particularly noteworthy are the alleged no-poaching lawsuits filed against several tech giants over the years, putting the spotlight on what author and TED speaker Margaret Heffernan calls “an ancient idea with poor pedigree” espoused by an industry that supposedly values originality and innovation.

She adds that anti-poaching agreements aren’t just tantamount to wage theft but career theft as well, as employers control their employees’ future by dictating who to hire, how long employees stay, and who they are allowed to work for after they quit.

Here are some of those alleged deals:

A highly publicized class-action lawsuit against Adobe, Apple, Google, Intel, Intuit, Lucasfilm, and Pixar alleged that between 2005 and 2009, the tech firms agreed to not hire each other’s employees. According to the lawsuit, this resulted in artificially low wages for the 64,000+ employees affected.

Intuit, Lucasfilm, and Pixar settled for $20 million in 2013. In 2014, the remaining companies (Adobe, Apple, Google, and Intel) offered $324.5 million to the plaintiffs, an amount the court rejected. In 2015, a settlement worth $415 million was finally approved. This translated to an average $5,770 for each employee.

The plaintiffs’ lawyers estimated that if the case went to trial and they won, the tech companies would have been compelled to pay billions of dollars.

The lawsuit ended in a $100 million settlement agreement with Disney, Pixar, Lucasfilm, and Two Pic MC; $50 million with DreamWorks Animation; $13 million with Sony Imageworks; and $5.95 million with Blue Sky.

In 2016, Samsung and LG were accused of a similar antitrust violation. According to the plaintiff, he was contacted by a recruiter and then later in the day was told that the conversation was a mistake because LG and Samsung supposedly agreed not to “steal each other’s employees.”

Oracle found itself on the receiving end of a lawsuit when, in 2014, one of its former employees alleged that the company conspired with Google to prevent the hiring of each other’s employees for certain managerial positions to keep salaries low. The case, however, was dismissed. The judge ruled that the lawsuit was filed too late.

Microsoft was also the subject of an anti-poaching lawsuit. Former employees alleged that the company entered into restricted hiring and anti-solicitation agreements with a handful of other technology corporations. The lawsuit was dismissed in 2015.

In 2012, the Department of Justice and the Attorney General of California filed an antitrust case against eBay over an alleged deal with Intuit, preventing the tech companies from hiring employees from each other. eBay settled for $3.75 million but insisted it did nothing wrong.

Effect of no-poaching deals on employees and the economy

In the U.S., no-poaching agreements are illegal. They benefit employers but at the expense of their employees. An article published by Knowledge@Wharton lists several reasons why anti-poaching deals are problematic, especially for the workforce:

As the need for qualified IT talents escalates, employee poaching can only intensify. No-poaching deals, while understandable when viewed from the standpoint of the employer, violate labor laws. They also stunt employee growth and limit mobility.

According to author and Wharton School professor Peter Cappelli, for companies not to lose their top talents through poaching,the way forward is to adopt a market-driven strategy that focuses on highly targeted employee programs instead of broad retention policies.